democratisation and creating a wider discourse

“There is a rising and excluding “WE” which we want to counter with an including “WE”, that is why we developed the Altoner Declaration. We want to send out a strong message for diversity and democracy…. we want to position ourselves within the values of our constitution. We want to stand together-this means everyone, regardless of origin, religion, gender, sexual orientation or sexual identity, age, or social status”.

Altona, a district which forms part of one the largest port conurbations in Europe-the greater Hamburg area, has a long history of immigration. Like many cities across Europe it has more recently experienced a dramatic rise in xenophobic populism and hate speech with traditional and social media stirring up segregation and deepening divides. Additionally, though the city (and also the region) is one of the wealthiest in Europe in terms of economic development and gross average income, inequality is still a reality and there are large differences between rich and poor districts.

We in Altona municipality wanted to affirm our city as a place where diversity is the norm- placing a commitment to diversity at the core of the city’s identity, policy and everyday life. The Altona Declaration has been the vehicle and overarching framework for doing this. Being part of the URBACT Transfer Network Rumourless Cities brought us added value particularly in terms of supporting us to develop a participatory process to create the declaration and accompanying campaign. Here in Altona, the declaration has been co-created by city leaders with residents together.

”In concrete terms, we were able to benefit from the exchange with the international partner cities. We learned how great the influence of positive rather than negative framing can be in conveying messages”. Adelina Michalk 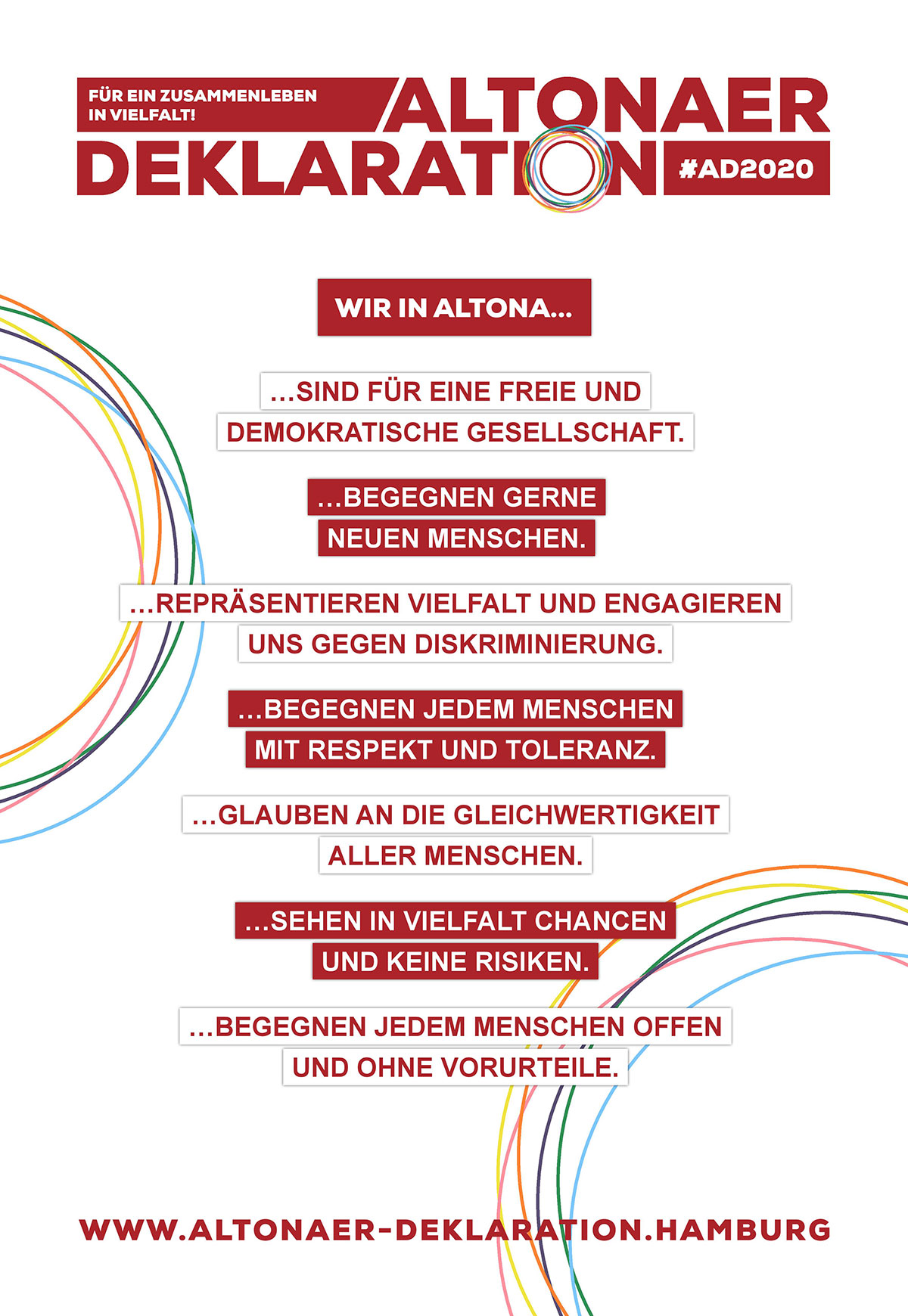 As stated by the leader of the council Stefanie von Berg of the Green Party, these declaration statements cannot be taken for granted and need affirming.
“The seven statements that were selected through citizen participation sound almost banal. But they are no longer a matter of course. Overall we see that there are forces that are constantly trying to question our basic democratic values and to question diversity”.

Rather than reinvent the wheel, we built on existing strong networks and projects operating in the area of community cohesion and democracy to create a wide network of stakeholders to direct and drive the project. We significantly broadened our participation in the process by instigating and facilitating community conversations. At public events and workshops across the district and via digital communications, residents from different backgrounds were asked their opinions on concepts such as social cohesion, community, democracy and equality and what sort of society they want to live in. In total around 200 people contributed to the content and sentiment of the declaration at this stage.

We collected content from phase 1 and edited this into 17 statements. We organised a public vote to select 7 statements for our declaration- publicising and collecting votes through a website, social media, public events and summer festivals. More than 1000 people took part in this voting process which far surpassed our targets. At this stage, two of our local politicians took part in a political roundtable with politicians from cities across Europe for the launch of an Inclusive Cities Framework organised by Rumourless Cities. This really helped galvanise support at the leadership level for driving our work forward.

The declaration was launched at a press conference by the city mayor and Marcell Jansen a famous local sportsperson and followed by a public democracy conference.

Launch- Stefanie von Berg and Marcell Jansen at the launch

Learning from Amadora’s ‘Do Not Feed the Rumour’ campaign we developed the campaign together with community stakeholders and organisations and won over well-known local celebrities as advocates and spokespeople. We worked closely with a local communications company specialised in developing brands for positive social change.

The arrival of Covid-19 forced a rethink of campaign strategy shifting it away from a summer public programme of events and community projects to a more digital focus combining a visual poster campaign, working with local media, creation of a ‘do it yourself’ campaign kit for stakeholders and civil society organisations to use and the creation of a dedicated website. The creation of a campaign kit and resources has helped to democratise the implementation of the campaign itself giving our local group of stakeholders the resources to create local communications and projects.

For more detail on the Altoner Declaration: